How an electric kettle knows when the water is boiling

Add a caption to a JPEG image without reencoding

This article describes how to run one of the V-USB demos on an AVR stick (which is an Easylogger clone).

V-USB is a firmware-only USB implementation for AVR 8-bit microcontrollers.  This means that it's possible for most AVR chips to communicate via USB, even though they have no hardware support for that. 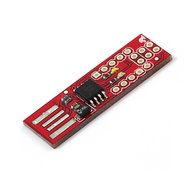 The AVR stick is a tiny circuit board that contains the minimum components to get a somewhat useful USB device, based on an ATmega85.  It costs about $10, and is available in Australia from Little Bird Electronics and also from Sparkfun.

I'll use the USB HID class, because it doesn't require any fancy drivers to get running.

Let's get the firmware working first.  The AVR stick works a bit differently to the circuit the demo is for, so we need a few changes.

The ATmega85 only has one port: port B.  The sample uses port D.  Edit these lines in /firmware/usbconfig.h:

The LED is on PORTB1, not PORTB0, so change /firmware/main.c:

Finally, we need to change the Makefile to match the ATmega85:

Where does 16500000 come from? The AVR stick uses the internal RC oscillator for its clock, which runs at about 8MHz.  The problem is, V-USB needs a clock speed of at least 12MHz to run.  ATmega5s have a fuse setting which doubles its clock speed (they call it the PLL clock or something like that).

While the internal RC clock is fairly stable, it's not very accurate.  When V-USB starts, it uses the USB signal to calibrate the clock so it runs at the same speed as the USB bus.  Using this calibration, it's possible to run the internal clock at 8.25MHz, which is doubled to 16.5MHz.  This is the speed the AVR stick must run at.

Since I was using the Bus Pirate to program the AVR stick, I had to change the AVRDUDE= line also.

That was it for the firmware - hopefully it compiles and uploads to the AVR stick.

Now for the software that runs on the computer.  When I compiled and ran ./set-led on, I got this message:

but when I ran lsusb, I saw this line:

"VOTI" doesn't match "LEDCtlHID", no wonder it couldn't find it!  But when I ran sudo lsusb -v, I saw this instead:

OK, so "VOTI" is simply the string form of the USB vendor ID 0x16c0, and the name "LEDCtlHID" is correct after all.  What's going on then?

I noticed that the usbOpenDevice function takes a few file descriptors, of which the final one is called warningsFp.  This is called from set-led.c; perhaps I'll change this last parameter from NULL to stderr.

That's a slightly more useful error message!  So the USB library doesn't seem to be able to use the device.  I read that some USB devices appear under /dev/usb, so let's have a look with ls -l /dev/usb:

Maybe that's the problem - there's no write permissions on the device.  To fix this, I'll make this device writable by everyone.  Create the file /etc/udev/rules.d/90-avrstick.rules, and put this in it:

then sudo reload udev.  Remove the stick then put it back in, then look at /dev/usb again:

That's a bit better.  Now run ./set-led on - the white LED on the AVR stick should come on!

There's one improvement I can think of - the C code is pretty ugly, so I had a go in Python.  I copied the USB calls from the C code.  The Python code follows:

That's much shorter than the C code, and does the same thing (admittedly there's much less error handling here).  I used the pyusb library version 0.4.2.  The documentation for this library is a bit thin, but I found the Python command "help(usb)" of some use, as well as the source code for the library.

Talking to the USB device is all using Control signals, which I think you need to do because it's pretending to be an HID device.  I found it interesting that they never send data to the AVR stick - they send the desired LED status in the "wValue" field, which sounds like a 16-bit field that's in every control message.  I don't know much about USB, but conveniently copying the C code worked fine.